BUSY Schools is Preparing Zac for his Chosen Career Path

Since posting this story Zac has now been offered a full time apprenticeship with Mannix Pluming. He has even been offered a company car once he gets his P-Plates. Zac is grateful to BUSY Schools and now has his career pathway and a bright future ahead. Read more about how it all began below.

Earlier this year, Zac started as a Year 11 student at the BUSY Schools Shailer Park campus. When a group of employers visited the campus to talk to students about different industry career pathways, Zac discovered exactly what career path was for him.

Before attending BUSY Schools, Zac found his previous school quite stressful and disappointing. Ideally, he wanted to go to a school that didn’t take a one-size-fits-all approach and since being at BUSY Schools for over a term, Zac now feels extremely relaxed and appreciates all of his teachers.

“BUSY Schools has helped me a lot on both an emotional and educational level. I have come to understand the subjects much better than my old school and I am also a lot calmer than I was, which has improved my learning,” said Zac.

In addition to his ongoing schoolwork, Zac has completed work experience, a White Card course, and is in the midst of completing a Certificate I in Construction.

Employment Pathways Officer at BUSY Schools Shailer Park, Karlene Feldbauer, said Zac has achieved so much since starting at BUSY Schools and is beginning to show initiative in taking those necessary steps to help kick start his career as a Plumber.

“Zac decided he wanted to be a plumber following the talk given by industry employers in term one. A couple of days later, he came to me with a phone number of a plumbing company that did some work at his house and asked if we could see if they would be interested in having him do some work experience there,” said Karlene.

Once Scenic Rim Plumbing had confirmed their interest, Zac completed his work experience there every Wednesday for a term, and although they were unable to take him on board once he had finished, he is determined to find more opportunities to launch his career.

“I really enjoyed helping the team fix broken pipes and dig trenches and am hoping to do an apprenticeship in plumbing, so I can eventually become a qualified trades person,” Zac added.

Lee Aitken, CEO for BUSY Schools, a part of the BUSY Group Ltd, said, “BUSY Schools offers a welcoming place where students feel safe and supported. Our teachers and staff inspire and encourage students to re-engage with their education and take initiative in forming their career pathways. We have a holistic service offering through the BUSY Group, with links to vocational education and employment services.

Whether students want to go on to higher education, a trades pathway or get straight into work, we work individually with each student so that they get the chance to become the best version of themselves.” Lee further stated. 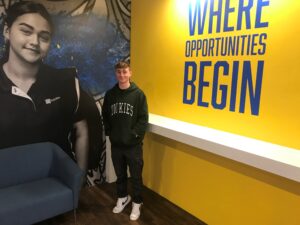 Since posting this story, Zac has now landed an apprenticeship with Mannix Plumbing and his career has now begun. He’s even been promised a company car once he gets his P-plates. Zac is really grateful for BUSY Schools and the direction provided – he has his future on track! Read more about how it all began for Zac below.

Thanks to the assistance and encouragement provided by BUSY Schools, Zac has decided he would like to pursue a career in Plumbing and has taken steps to help launch his career.