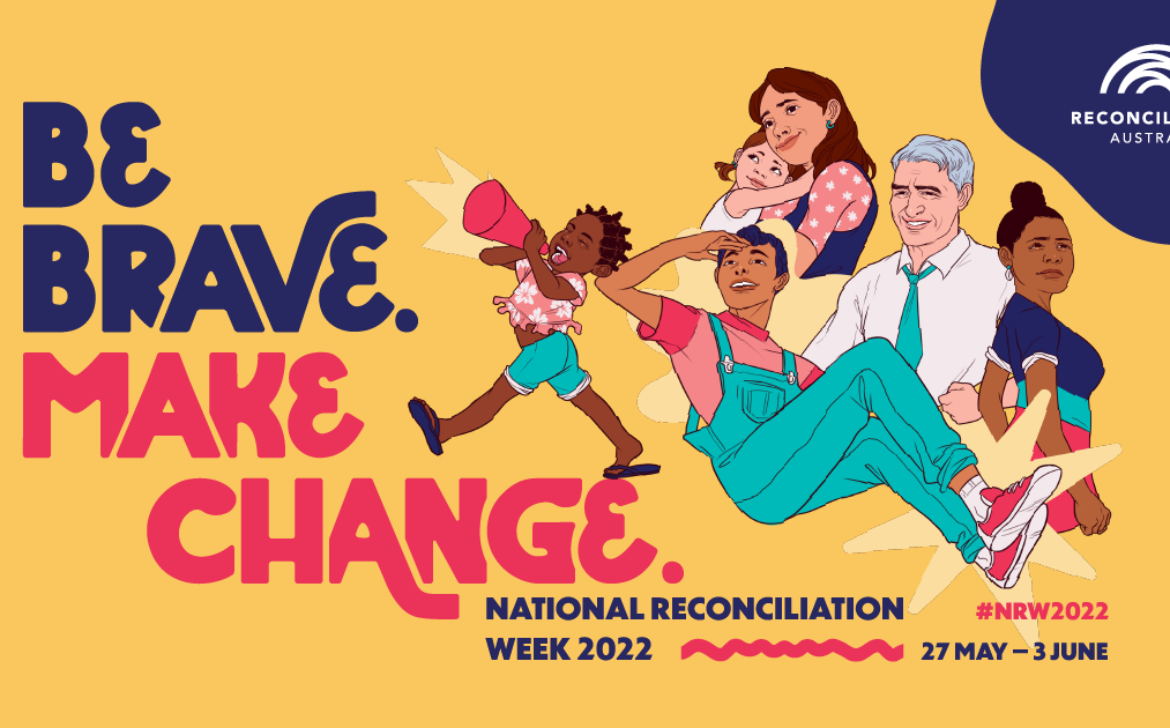 National Reconciliation Week is a reminder for all Australians to contribute to achieving reconciliation for our first nation’s people in Australia, prompting all of us to learn about our shared histories and cultures.

The week always runs from 27 May to 3 June as it coincides with two significant milestones in the reconciliation journey so far: that of the 27 May, 1967 Referendum which saw an overwhelming 90% of Australians vote to give the Australian Government power to make laws for Aboriginal and Torres Strait Islanders and recognize them in the census; and on the 3rd June 1992, Eddie Koiki Mabo’s court challenge which lead to the legal recognition of Aboriginal and Torres Strait Islander peoples as the Traditional Owners and Custodians of lands, and paved the way to Native Title.

This same year, 2001, which saw 300,000 people cross the Sydney Harbour Bridge as part of National Reconciliation Week which prompted other cities and towns across Australia to conduct bridge walks also.

At The BUSY Schools (a part of The BUSY Group), our vision for reconciliation with First Nations Peoples has its origins in our commitment to have more people in jobs, more people learning new skills, and more communities exposed to positive change, in partnership with employers and industry.

We recognise that a community-led, strengths-based approach that values the experience of First Nations Peoples is the best way to accelerate improvements in their life outcomes.

To make this vision a reality it is our intention to consult with First Nations Peoples to truly understand how we can work together to create opportunities.

The BUSY Group is driven by passion and commitment to make a difference by supporting Reconciliation through our commitment to the actions outlined in our ‘Innovate Reconciliation Action Plan (RAP)’ which re-enforces our genuine commitment to improve the lives of one of the oldest surviving cultures in the world and assist in driving social change.

Throughout our offices, through morning teas and group communications, we’re encouraging all of our staff this year to Be Brave, Make Change, to reach out and connect with our First Nations Peoples, and the opportunities we can provide to improve lives through career pathways, vocational skills, employment and financial independence.

The BUSY Group was lucky enough to have one of our former employees create an art piece to represent our journey. This artwork is displayed in many of our offices.

This is about the journey that BUSY has taken to get where they are now.

The black symbols represent the aboriginal men and women who had lived, worked, and looked after the land before our offices came to be where they are.

I have also painted a kangaroo and emu track to represent all the animals who walked the land before we began our journey.

The yellow circles are in a symbol that represents ‘meeting place’. For BUSY, this whole journey has been one big meeting place for everyone to come and meet with all people across the organisation to help them gain employment or start their pathway to success.

The biggest circle in the middle is a representation of Southport where the journey began for the BUSY staff with Martin Punch, our founding director’s hand print in the middle. Below Martin’s handprint is a sea mullet. The sea mullet represents the Yugambeh people.

While researching for my painting I got onto uncle Ted Williams and asked if I might be able to use his totem as a symbol for the head office. Uncle Ted asked if I could paint the sea mullet, as the sea mullet represents all the Yugambeh people because when the sea mullet would come in close to shore the people would go fishing and catch a big heap of fish to then take back and share with all the mob.

The other offices are represented through totems of the traditional owners of the land that they are situated. This is to show our respect and acknowledgement of the traditional owner. Every dot on this painting represents every worker and the individuals they have helped over the years, representing the hard work that has contributed to becoming such a great organisation. 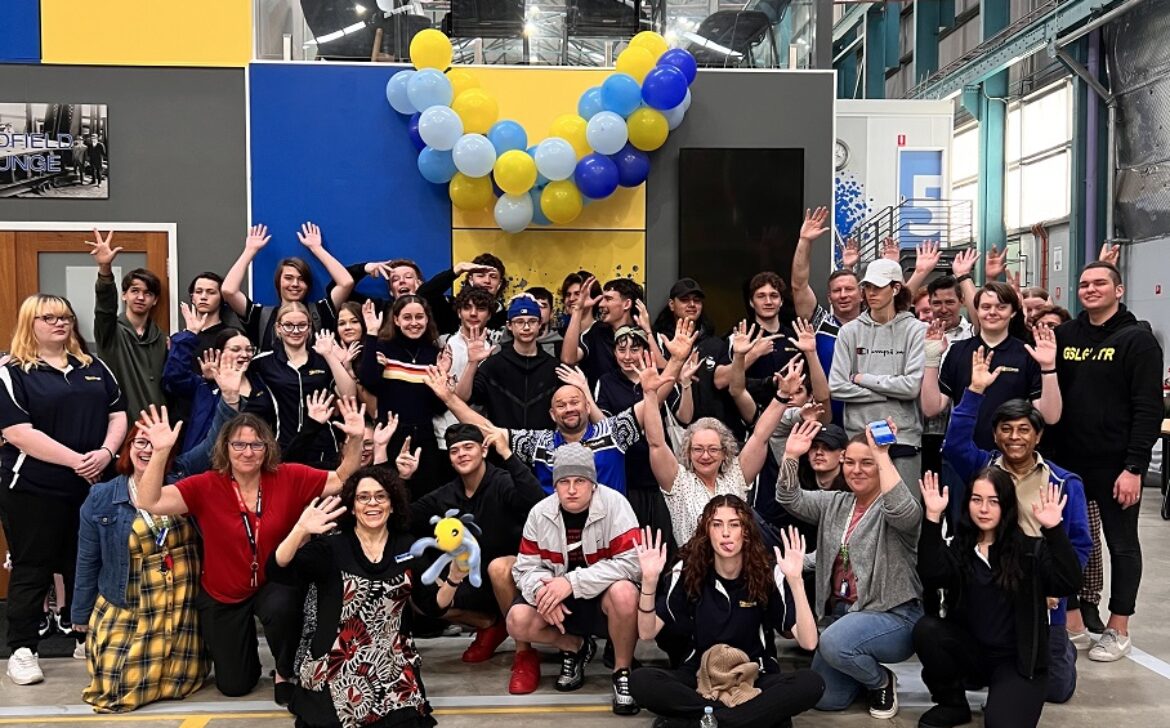 The BUSY Schools Salisbury Turns One!

The room was bursting with sounds of cheerful laughter, lively conversation and party horns being blown with uninterrupted zeal, as students and teachers gathered to celebrate the first birthday of the school.

The BUSY Schools Salisbury campus opened on May 19th of 2021, with just 11, Year 11 students. Almost half the school year had passed, and these first students found themselves completing an entire Year 11 syllabus in just over 6 months.

A year later, these students are just a few of the 121 students currently enrolled at The BUSY Schools, Salisbury campus. Since commencing, they have completed certificates in either construction or workplace skills, acquired first aid training, white cards, or RSAs, and—in just over 6 months, they will become The BUSY Schools Salisbury’s inaugural graduating class of 2022.

After a satisfying sausage sizzle, partygoers gathered for speeches prepared by some of their teachers and peers. Students spoke of how they struggled with the culture of traditional schools before moving to The BUSY Schools, while others spoke of how the teachers at The BUSY Schools gave them the confidence to try subjects they previously considered themselves failures in.

“Learning math is important…but whether you pass or fail, that doesn’t affect your value as a human…” their math teacher asserted. This statement sums up what so many students seemed to appreciate about The BUSY Schools Salisbury—a space where they feel valued and accepted for who they are.

After the speeches, a special ceremony took place—the introduction and naming of BUSY BEE, The BUSY Schools Salisbury’s new mascot. Students had placed their ideas for names into a hat, with suggestions such as Bazza and Jaquaviontavious among the contenders, and the crowd waited with bated breath as Principal, Liza Page, reached into the hat and picked out the winner—Michael with his BUSY BEE entry.

The crowd burst into laughter, and the smiles stayed on their faces as they ate a delicious cake—baked and beautifully decorated by their talented classmate, Jen. This was followed by rounds of classic party games. As some students guided their blindfolded friends through a makeshift obstacle course, others tried, and mostly failed, to Pin the Stinger on the Bee. An especial crowd-pleaser was Donut on a String, where teachers, from their perch on top of the stairs, dangled donuts above the heads of their students, who attempted to eat them without the use of their hands.

“Today was insane” grins Xero, who moved to The BUSY Schools for Year 11. “Also, it was a pretty fun thing to do.”

The BUSY Schools is a unique environment where students who have disengaged or are at risk of disengaging from traditional schooling can continue to work towards their QCE with support and understanding while finding their pathway to future employment.

“I actually dropped out of school early, in the middle of Year 11” confesses Liza, Principal of The BUSY Schools, Salisbury, “I wished there was a school like this, so this really captures my passion.”

“We have these people watching our backs so we don’t fall” declared Aaliyah, a founding student of The BUSY Schools, Salisbury.

To students in mainstream schools who are finding themselves disengaging with their education, Year 11 student, Matthew, recommends making a change: “This school makes me want to come to school, and try, and actually put effort into my work. So come to The BUSY Schools. It will change things.”

In its first year, The BUSY Schools, Salisbury has supported the future education and employment direction of over 120 students who were otherwise unlikely to have completed senior school — and that is certainly worth the celebration. 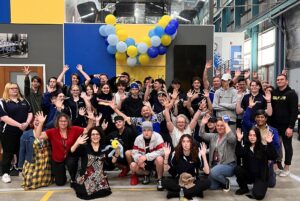 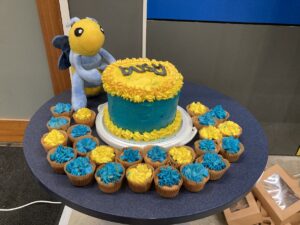 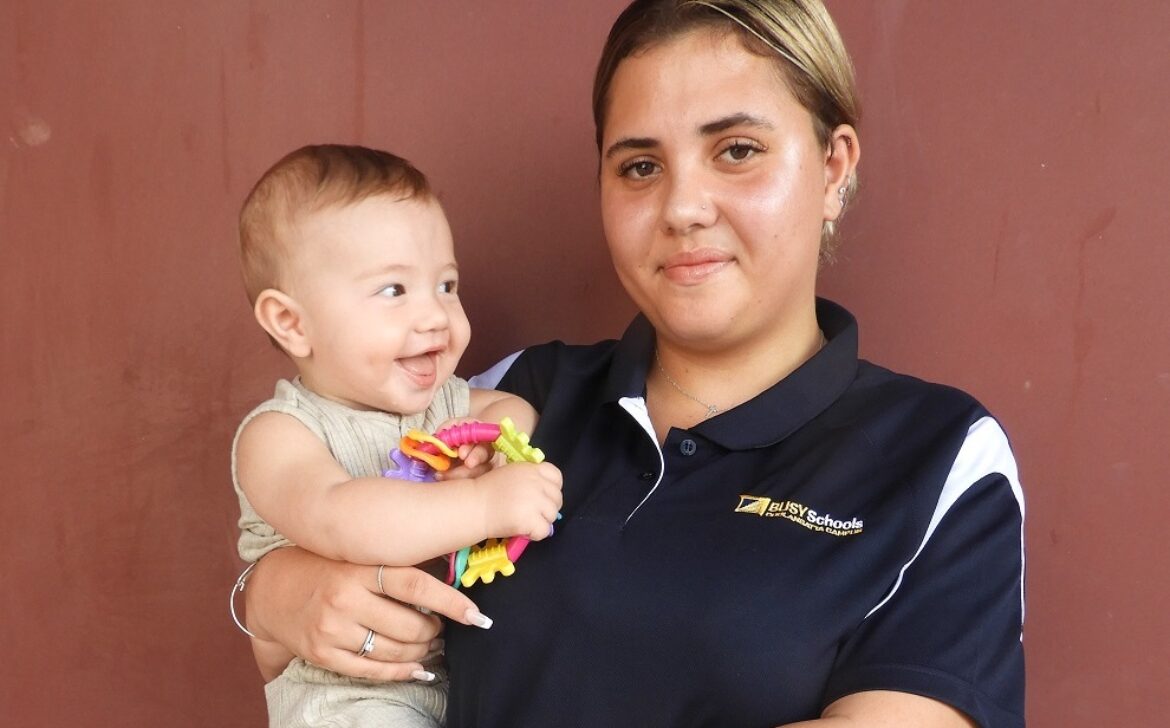 Adarlia has big plans for her future!

The past few years have been particularly disruptive for school students across the country (no thanks global pandemic!). For Adarlia this was even more so because, on top of trying to learn via distance education, being pregnant and battling severe morning sickness saw her in hospital 2-3 days per week for most of her pregnancy.

An indication of her determination and love of learning, Adarlia persisted with wanting to finish her schooling after giving birth to her beautiful baby boy Micah. This led to her enrolling at The BUSY Schools new Coolangatta campus.

Delivering an alternative learning solution for students in years 11 and 12 who are looking for an opportunity to re-engage and complete their studies, The BUSY Schools support students to complete their QCE and graduate onto a Vocational Education and Training (VET) career or into further study, including university pathways. The BUSY Schools program is designed for students who, for a variety of reasons, find traditional schooling difficult. Teachers work closely with students and their family to re-engage them with education in a nurturing environment that leads to career outcomes or further education that suits their abilities and passions. In a highly supportive, personalised and inclusive environment, the schools offer no fees, smaller classroom sizes, wellbeing support, access to vocational work experience and career pathway guidance.

The newly opened Coolangatta campus (one of four campuses across Queensland), was the welcoming and supportive schooling environment that Adarlia needed to help her complete her studies and fulfil her career goals.

Adarlia said, “I’m someone who really enjoys education, learning and study. I really wanted to finish Year 11 and 12 but had to wait until after Micah was born to enrol”.

I love it here at BUSY Schools! The teachers are so supportive and treat us like adults, not kids. My short term goal is to start an apprenticeship to get into legal studies as I would like to get into law – either family law or criminal law. My long term goal is to become a lawyer and help indigenous kids as there is a large percentage of indigenous kids in the court system”, Adarlia further stated.

A proud indigenous woman herself, whose father hails from Gilgandra country, Adarlia is hoping to gain a scholarship into further study to help her achieve her career goals.

With her determination, incredible maturity for her age, and the support she is receiving through The BUSY Schools, there is no doubt Adarlia will be an amazing role model for her son Micah and achieve her mission of becoming a lawyer and making a positive difference for indigenous kids in the legal system.

The newly-opened Coolangatta campus is accepting enrolments for Year 11 students. For more information regarding The BUSY Schools, including eligibility and enrolment, visit www.busyschools.qld.edu.au or contact The BUSY Schools by emailing admin@busyschools.com.au or by calling 1300 176 472. 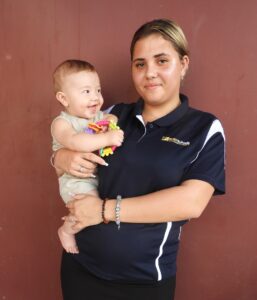 Adarlia (pictured with Micah), is determined to fulfil her goal to become a lawyer and make a positive difference for indigenous kids in the legal system.